Ken Westrick came all the way from Colombia, South America to The Flight Academy based out of Seattle, Washington in early 2015 for their fast-paced Top Gun program. He was looking to finally finish his flight training. Ken began ground school at the young age of 13 and 40 years later, earned his license. It wasn’t for a lack of trying, but in Ken’s words, “life happened.” He put his love of flight on hold until two years ago. He saw a Cirrus, and that was it! His passion for aviation immediately returned, and he knew he wanted to fly. However, Ken was busy to say the least. Running his own business and finding time to learn was a challenge. “I had tried two other times to complete my training, but I wasn’t able to. I couldn’t dedicate the time needed. I wanted to build on my education day by day instead of coming back weeks later and having to relearn everything. At long last, I had an opportunity come up to where I had about a month’s time. I took that chance and ran with it,” said Ken.

And run he did. Ken teamed up with instructor Daniel Valadez at The Flight Academy to do his training. “Our Top Gun program is intense, but I like it. I really enjoyed the way Ken took it on – doing it all in such a short amount of time. Having training one day after the next is easier and faster. If you can immerse yourself into training, this program is the most efficient way to learn,” said Daniel.

For Daniel, teaching in a Cirrus made his job a lot easier. Ken took 63 hours over the course of just 21 days to get his Private Pilot’s License. His excitement and steadfast determination to complete his training sped him through the Top Gun course while learning at an impeccable rate. Ken flew to 17 different airports in Washington and Oregon. The Flight Academy put him in a Cirrus SR22T, equipped with Cirrus Perspective™ by Garmin® avionics, as it was the aircraft Ken wanted to buy. “He was very smart and a fast learner. I always tell my clients, it’s not difficult to learn how to fly – all it takes is dedication and time, consistent time,” said Luke Lysen, President and Founder of The Flight Academy. Ken dedicated his time, and it paid off for him. “All of my training was wonderful, and I don’t have a favorite part. The whole experience was my favorite part. Being able to fly over Eastern Washington and the mountains was amazing. The area and local airports really made the experience,” explained Ken.

Ken recently purchased an SR22 GTS and based the aircraft in Michigan, so he can fly to and from work in Boston and Washington D.C. “Being able to fly to work during the week gives me the flexibility to live and work where I want. I’m tired of the gridlock traffic of those big cities. I want to settle down in the country with my family and enjoy the peaceful life on the weekends,” said Ken. Ken and his 11-year-old son have already started planning the trips they want to take in their Cirrus. “He’s more into flying than I am! We’re mapping out trips to the Bahamas, Alaska, Colombia and maybe even a trip to Paris. I’m also looking forward to reconnecting with my old army buddies that I haven’t seen in over 20 years. I can’t even begin to explain how exciting it’s been flying my Cirrus,” said Ken.

As a Cirrus Platinum Training Center, The Flight Academy is a part of Cirrus’ flight training network. Their dynamic Top Gun course for advanced learners is the most unique out of their training programs. The course includes 70 hours of flying in a one-month time span to earn your Private Pilot’s License. The course meets all FAA requirements and all the requirements necessary to become a successful Cirrus pilot.

To learn more about The Flight Academy and their Top Gun program, visit: www.theflightacademy.com. 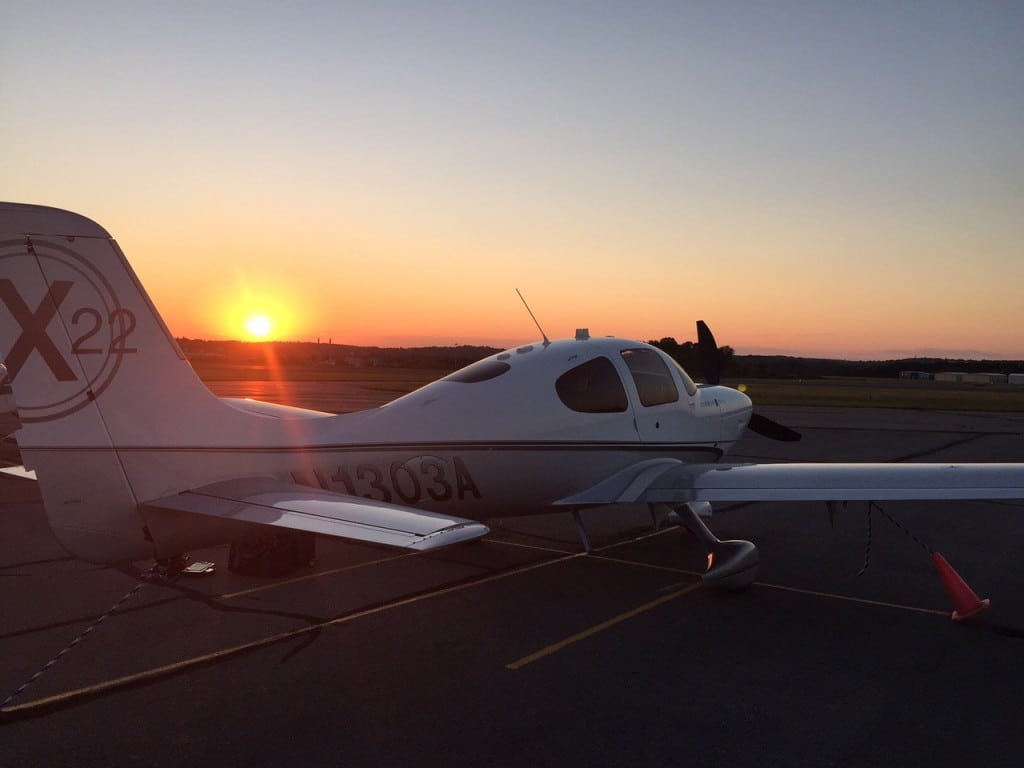 Ken’s new SR22 GTS after a trip from Michigan to Boston.